Welcome to Number Twenty-Five of Gloomscapes. This will be the last post for a while, as I’m taking a break from the series, to gather some new material and ideas for the future.

And it couldn’t be any other way than ending it with the very best–The Handmaid’s Tale by Margaret Atwood. 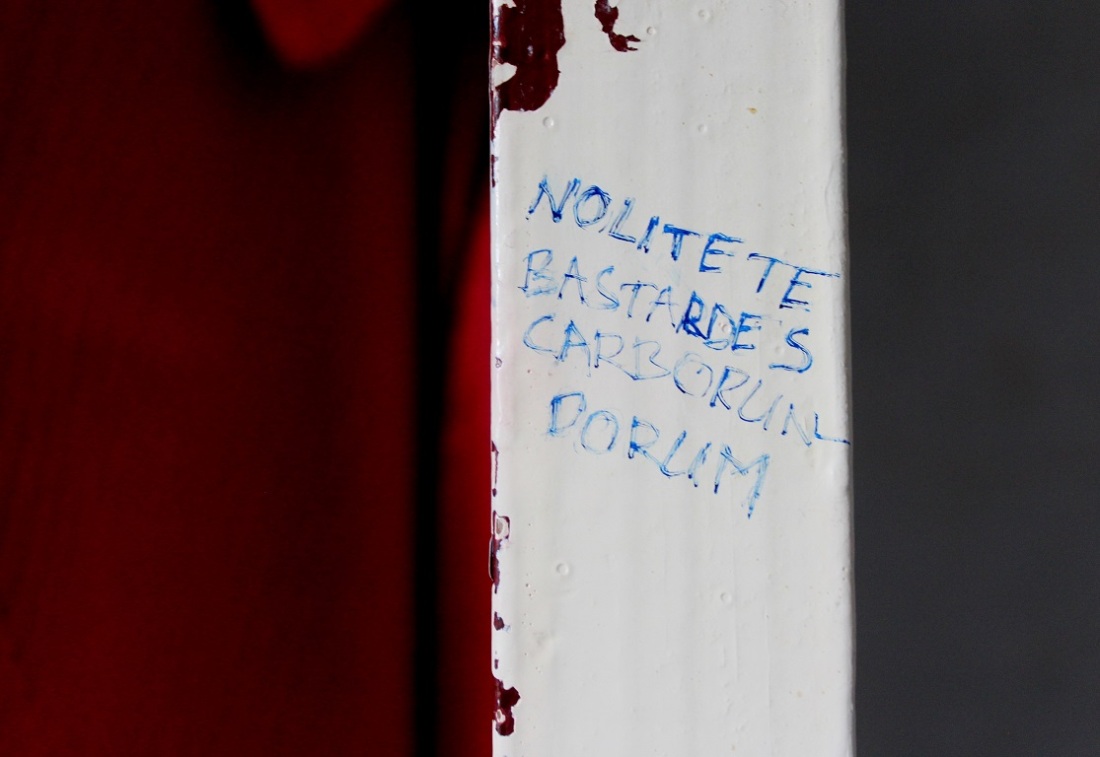 And there it was, in tiny writing, quite fresh it seemed, scratched with a pin or maybe just a fingernail, in the corner where the darkest shadow fell: Nolite te bastardes carborundorum.

Don’t let the bastards grind you down.

And it’s Part Twenty-Four of Gloomscapes. 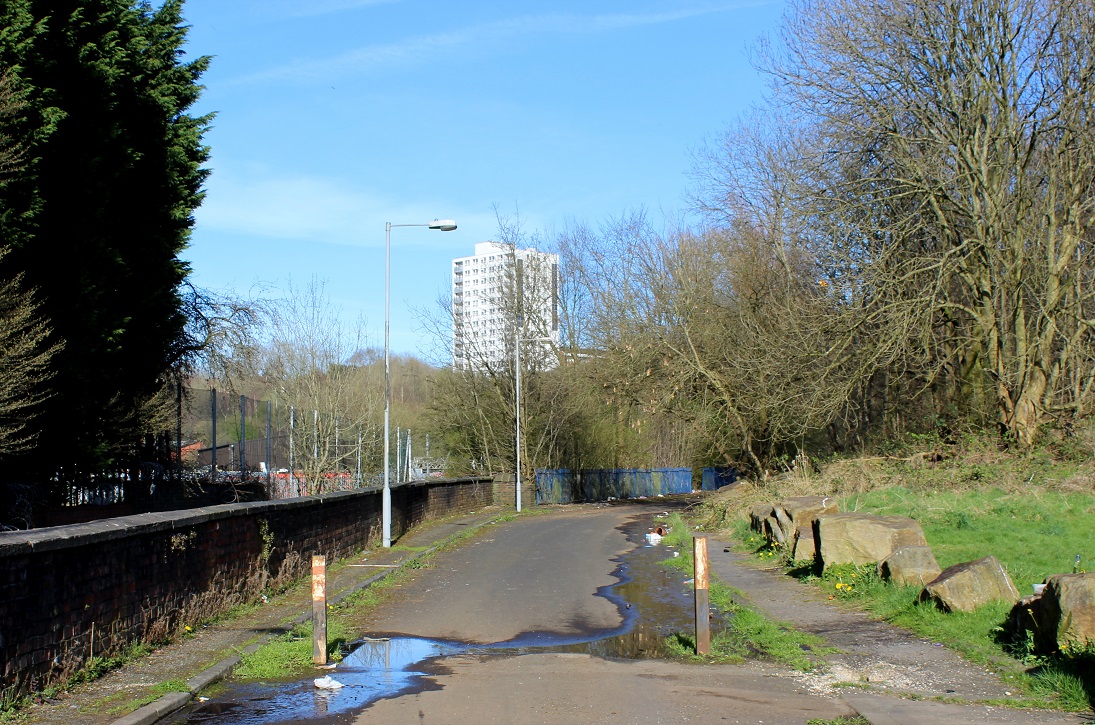 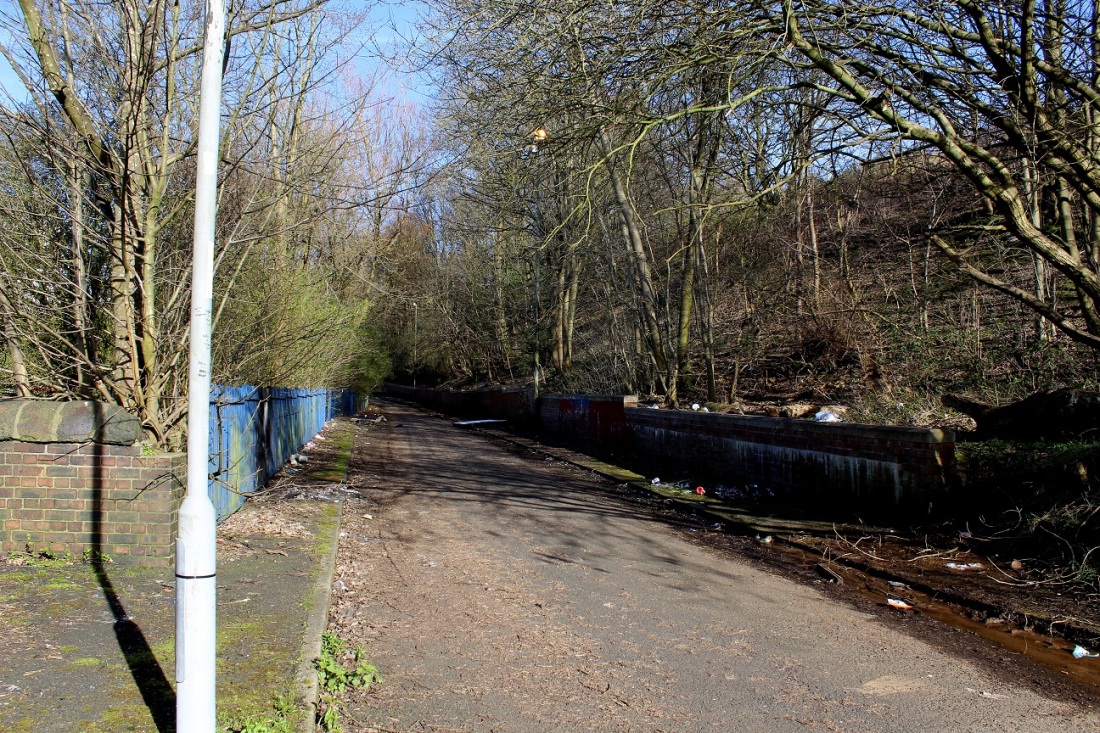 It wasn’t meant to end like this. The Council announced the project five years ago. This area had been abandoned for so long; nowhere else in the city needed this more than us. We will be working with the local community, they said. Park and lots of greenery, beneficial to people and wildlife, they said. A corridor to the heart of the city, they said. Future developments will lead to links to with north and east quarter, they said. It was more than a million they were investing… then nothing happened. Where did all that money go? They forgot about us… again. 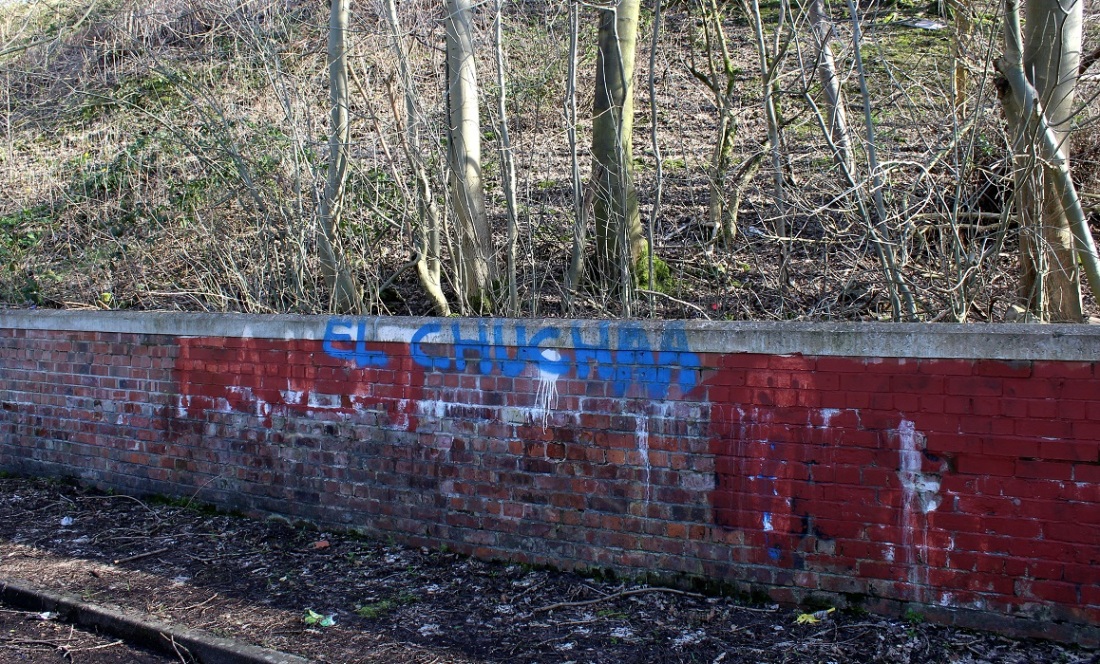 More brutalistic architecture today; this time a canteen of an office building. I was thinking of the canteen in George Orwell’s Ministry of Truth in 1984, though that one was underground. 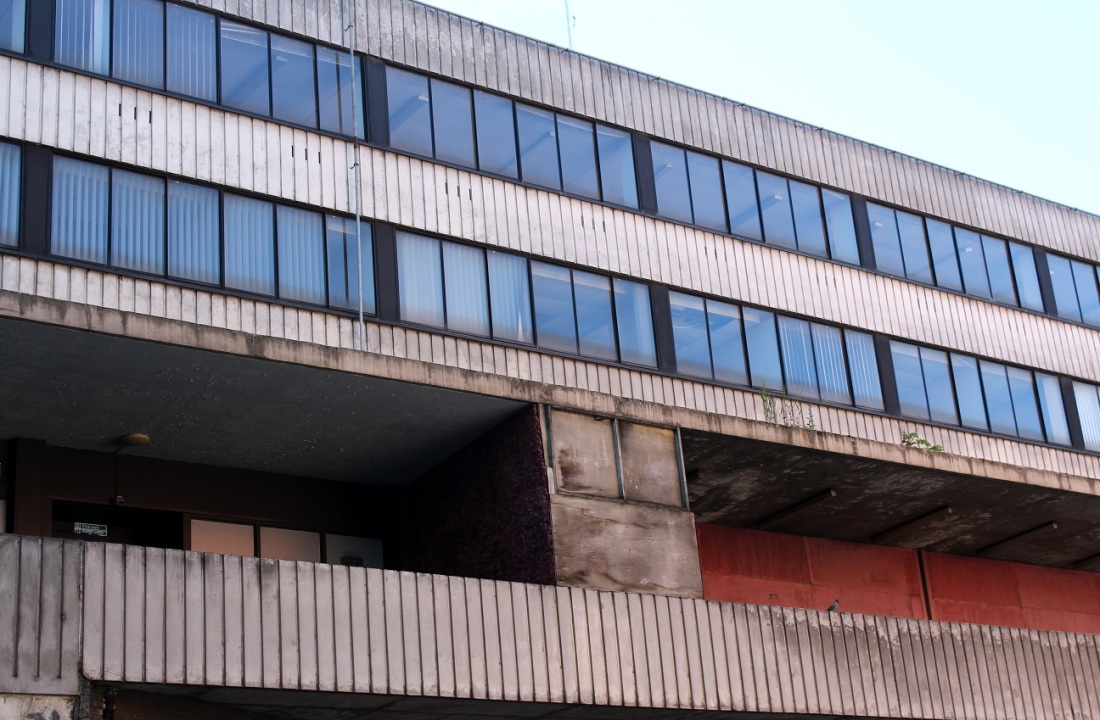 The lunch queue jerked slowly forward. The room was already very full and deafeningly noisy. From the grille at the counter the steam of stew came pouring forth, with a sour metallic smell which did not quite overcome the fumes of Victory Gin. 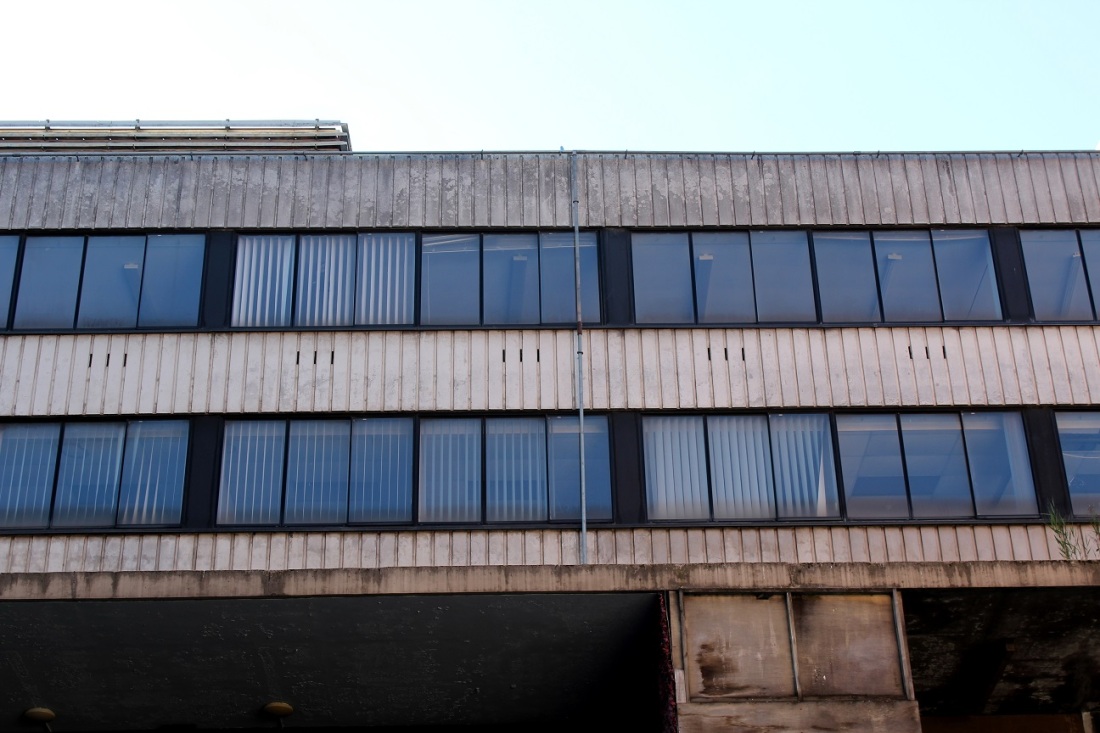 This was also the place where Winston and Julia arranged their first date, over spoonfuls of stew. 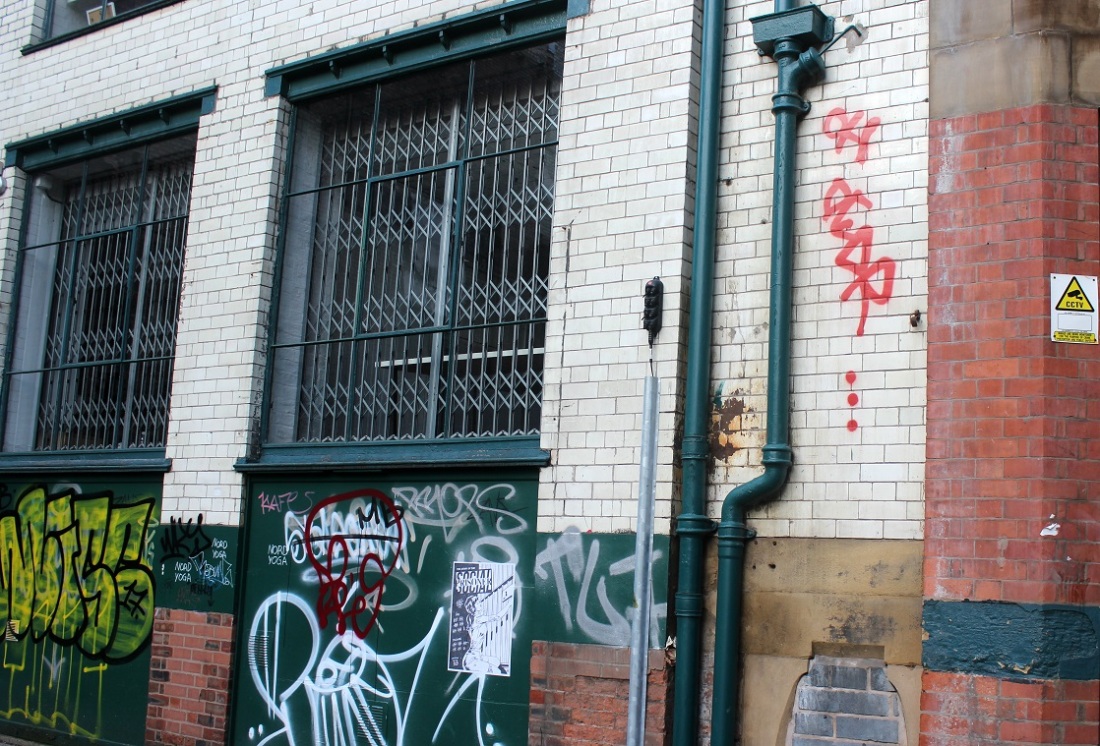 The three dots remind me of drops of blood. Maybe that was the artist’s (writer’s?) intention. I purposely didn’t crop out the CCTV sign. Because, you know, they are watching us…

I’m thinking of posting up to 25 and then take a break. New material is needed.

I’m just wondering, anyone out there who is a fan of dystopia/post-apocalypse and likes to take pictures too, how would you depict your favourite fiction in photographs? Have you ever tried it? Let me know in the comments.

Greetings, I present you Part 21 in my Gloomscapes series. 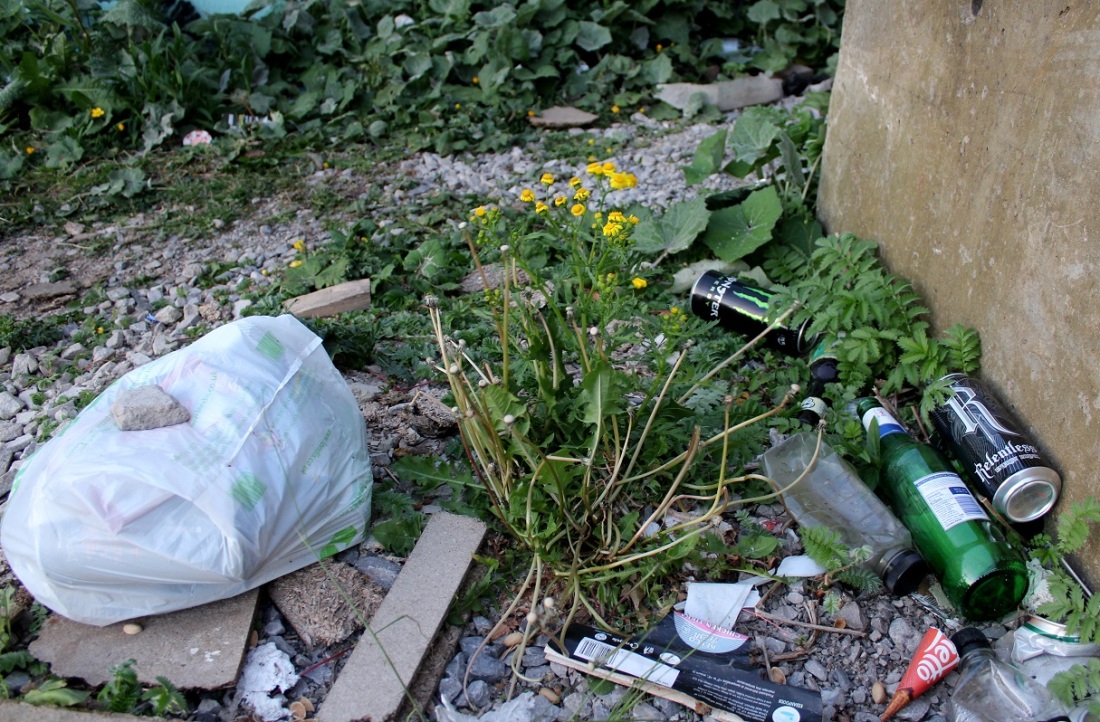 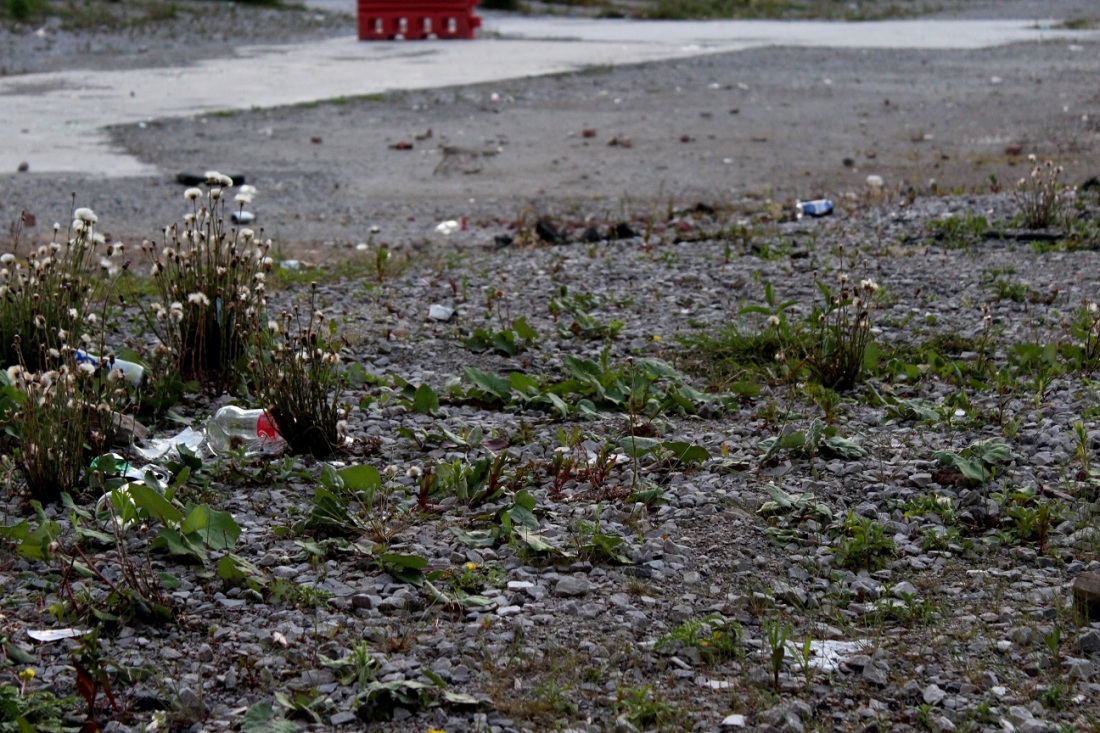 To mark this occasion, I have decided for something less gloomy, maybe even a bit fun–and a dialogue from my favourite YA dystopian series. 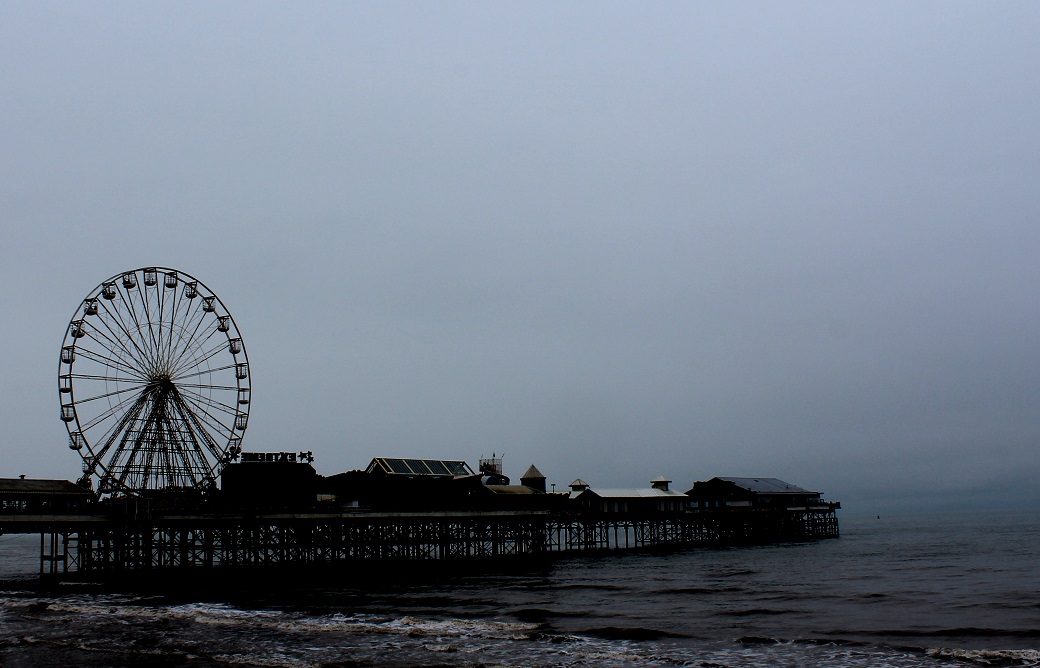 “Think about it. People used to ride that thing. For fun,” says Will, shaking his head.

“They must have been Dauntless,” I say.

“Yeah, but a lame version of Dauntless. “Christina laughs. “A Dauntless Ferris wheel wouldn’t have cars. You would just hang on tight with your hands, and good luck to you.”

We walk down the side of the pier. All the buildings on my left are empty, their signs torn down and their windows closed, but it is a clean kind of emptiness. Whoever left these places left them by choice and at their leisure. Some places in the city are not like that.

The world in the Divergent series is a city divided into five factions. The above mentioned Dauntless are one them. They’re the brave ones; Abnegation are the selfless, Candor the honest, Erudite the ones that value knowledge and Amity are the hippies. Then there are the factionless, who don’t fit into any faction and live on the fringes of the society. I’m a definite Erudite myself, though I think the Dauntless are the coolest ones.

The picture I chose for this week’s Gloomscapes post does truly not need any more words, so here it is: 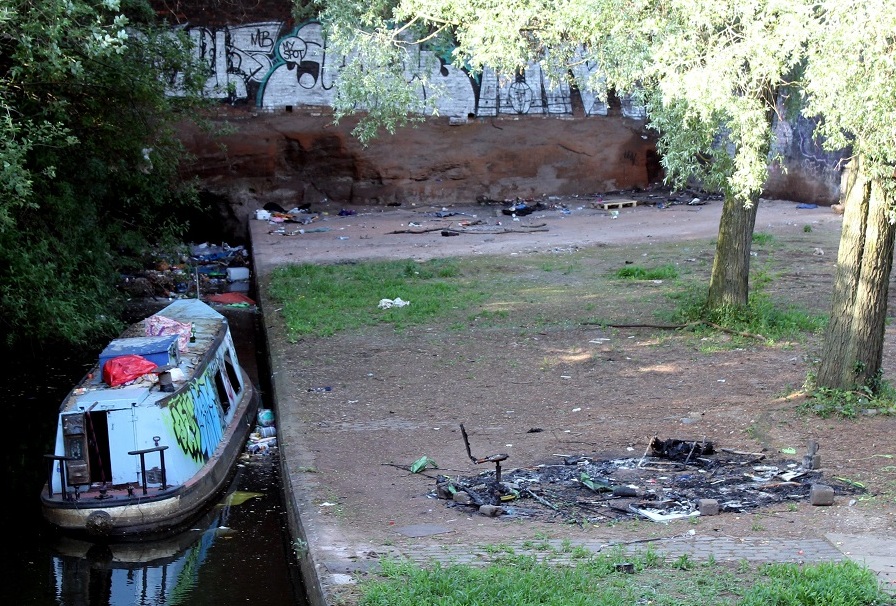 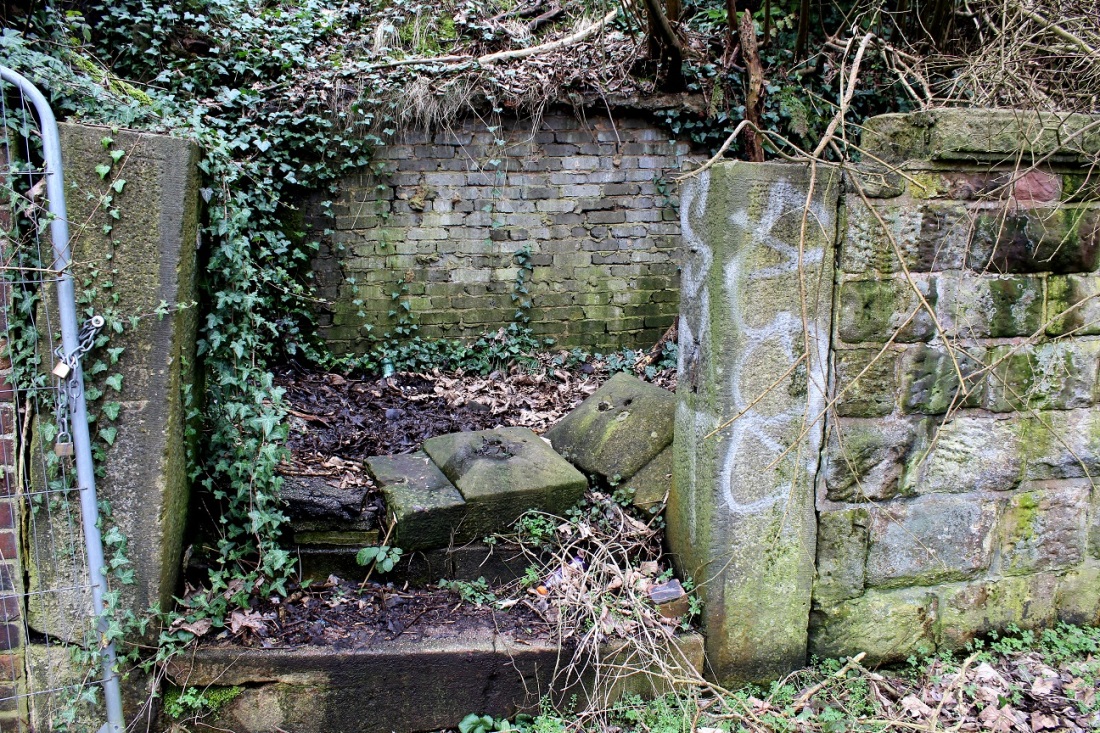 No quotes, no slogans, just a faded graffiti scrawls.

In last week’s Gloomscapes post, I was initially going to add one more picture of a broken window–the one I am posting now. But as I was looking at it, an idea started forming in my head and I concluded that not only did it deserve its own post, it deserved its own piece of fiction.

This is not meant to be a regular thing, I just got inspired. Enjoy! (Or not, as I say.) 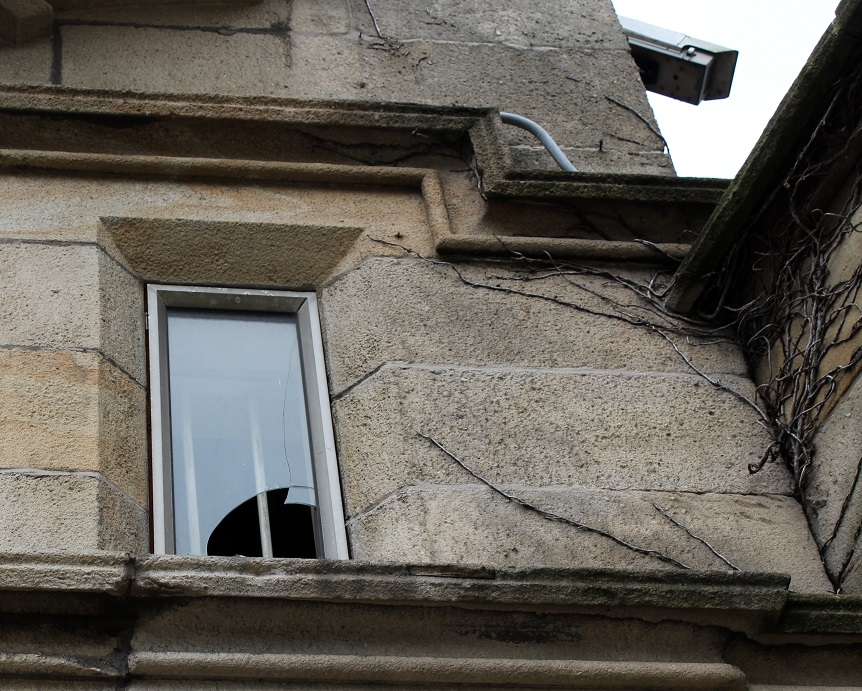 Nobody knew how Zara got that stone.

The girls were kept in what used to be a convent. An imposing, forbidding stone building, newly installed security cameras in each corner. Thick walls, windows high and narrow, with bars on them. Little sunlight got through; the residential wing faced north. Inside, all the rooms were identical. Floors of dark hardwood, walls painted slate grey.  A bed in each corner, metal-framed, with a thin mattress and an old worn-out blanket. No pillows. One single lightbulb hung from the ceiling. Heavy black doors were locked every night at nine o’clock by the guard on duty, unlocked again at six in the morning. The girls wore long grey dresses, starched white blouses with high collars and black shoes. The oldest ones were no more than sixteen years old. Those were the only ones who still remembered books, music, films and TV, videos, photographs. Now, all they were allowed to carry around was the Party Manifesto pamphlets. As if they didn’t know it by heart already, as if it hadn’t been engraved into their minds. To build and protect our homeland, be prepared. Always Prepared! Yet they carried it, every single one of them, dog-eared, covered with greasy fingerprints and doodles, here and there quotes and passages highlighted in neon colours, from the time before even neon highlighters were banned. Desperate attempts to mark their own individuality.

Afterwards, Zara’s roommates swore they didn’t notice anything unusual. Zara was a quiet girl who kept to herself. It seemed she had wandered off behind the gardener’s shed, the only place where such stones could be found, during the afternoon break, when even the strictest of teachers couldn’t deny themselves the indulgence of little rest. She hid the stone in her sock, at the back of her calf, no doubt thankful this time for the long skirt. She kept it there throughout the afternoon activities and dinner, until it was time to return to the rooms. Half an hour after the lights went out, she slipped out of her bed, clutching the stone in her hand, tiptoed to the window and with all the force she could gather in her sixteen-year-old body, smashed the glass.

Disclaimer: the above text is entirely fictional. The photographed building is not a former convent and no girls are kept there. The writing is merely a work of my imagination and was inspired by the picture of the broken window.

And it’s another entry in Gloomscapes.

Today I give you–broken windows. 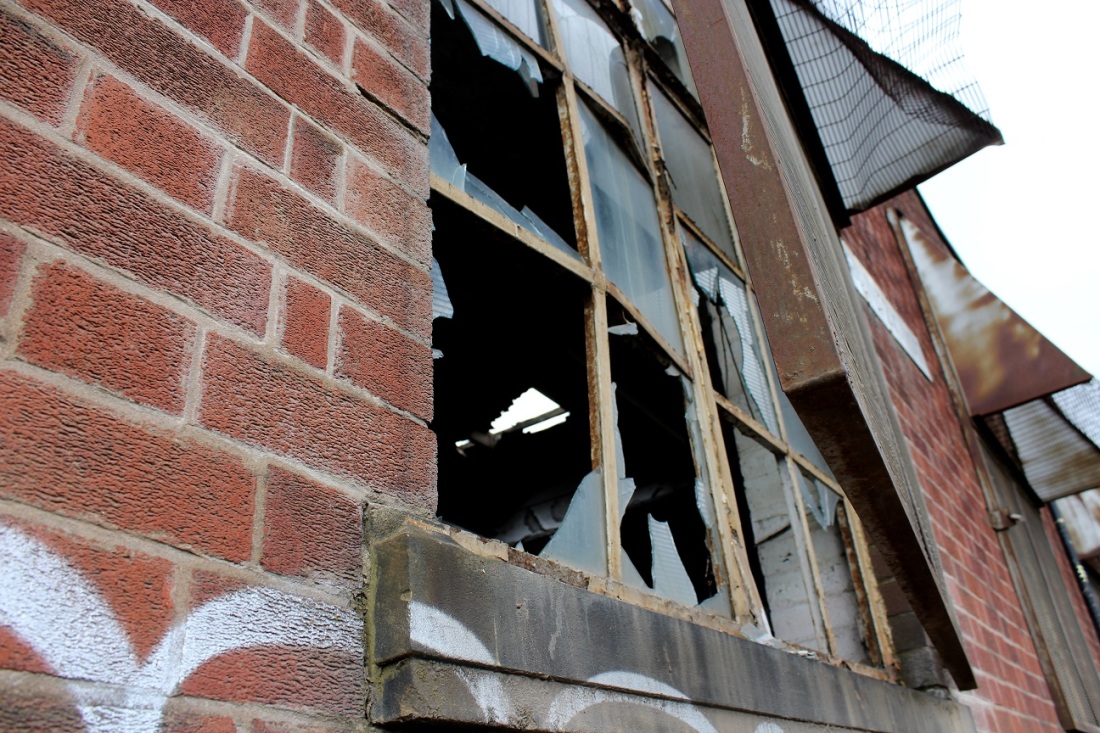 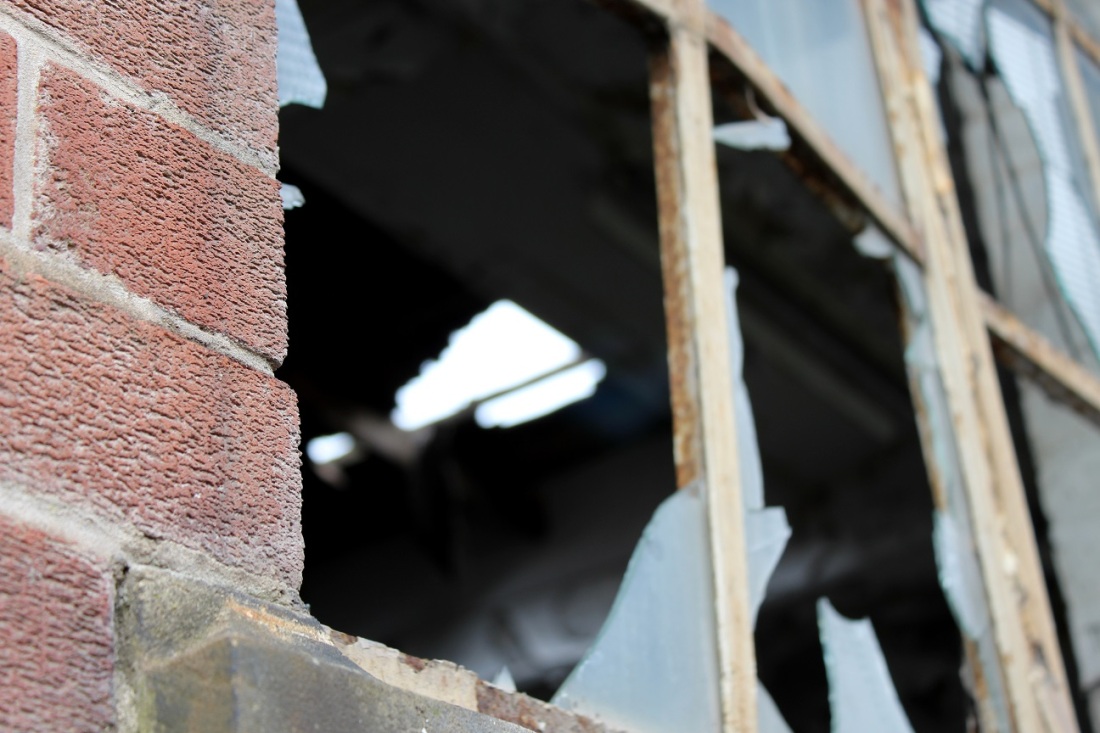