Note: A post titled A Work Of Art was originally published on Some Photoblog in June 2021. I have come to a decision to delete and republish it with some changes to the text and expanded title (the pictures remain the same as in the original post). I explain why below.

This painting hangs in Manchester Art Gallery (quite high up, hence the awkward angle).

(Look, I don’t know. Maybe the nymphs were just like: dude, you’re trespassing. It doesn’t have to be that deep. Waterhouse can hardly be blamed for some femme fatale shit, when it’s a story from the Greek mythology. Also, I like Pre-Raphaelites. I like nice things. I’m a visual person.)

The image below is a scene from Pirates of the Caribbean: On Stranger Tides, the fourth film in the series, released in 2011, directed by Rob Marshall:

Okay, so you have to squint a bit. But you can see it.

The two stunningly beautiful people are Philip and Syrena, played by Sam Claflin and Astrid Berges-Frisbey. Syrena is a mermaid, not a nymph (and there are no water lilies, obviously), but she does look like something Waterhouse would have painted. He seemed to have had a thing for women of mythology and legends, and bodies of water. (Waterhouse, get it?) Philip is no Argonaut, he’s a missionary, which is why he wears that cross, but he was on a ship. Which is, I suppose, a logical occurrence in a movie centred on pirates. On Stranger Tides is probably the weakest in the series, but it’s still worth watching for these two, if nothing else. Their romance would surely inspire artists and poets alike. There was something so pure about it, stupid as the word is. I love Philip and Syrena, they own my heart.

*spoilers* Interestingly, much like Hylas, Philip was never seen again either. His fate is a bit ambiguous, as he’s injured, likely quite critically, and the above scene is the moment just before he and Syrena kiss and she pulls him into the water. It was established earlier in the movie that a mermaid’s kiss can heal, and she does tell him: “I can save you, just ask,” though he doesn’t ask, he says he wants only forgiveness, as he blames himself for her capture. She kisses him anyway (get in there, girl!), and the last we see of them is when they float underwater. But I’m positive Philip didn’t die, the reason why neither him nor Syrena appear again is that The Powers That Be decided not to use them any more. *end spoilers*

So, now for the controversial part. My original June 2021 post was a silly entry about how film snobs need to get over themselves and step on a Lego, because the similarity between the Philip and Syrena scene and the Waterhouse painting proved that Pirates of the Caribbean films were a work of art. Not that I no longer believe this to be true (because the similarity cannot be denied), but it is a frivolous matter compared to… well, everything surrounding the lead actor of the franchise.

However, I maintain that the Pirates movies don’t necessarily have to revolve around the character of Jack Sparrow because they still have a lot going for them that is not Jack Sparrow. (In fact I think the later instalments should have reduced his role). Adventure, humour, horror, romance, and a lot of swashbuckling action. There are plenty of other great characters; the first trilogy truly belongs to Will and Elizabeth. I mean, it’s Elizabeth who becomes the Pirate King. Not Jack. There’s Tia Dalma and Davy Jones. Weatherby Swann (Elizabeth’s father), James Norrington, even Cutler Beckett. And the films always nail their romances. Will and Elizabeth, Philip and Syrena, and Henry and Carina in the fifth film. And I think Geoffrey Rush’s performance as Hector Barbossa is just as iconic as Johnny Depp’s Jack. The scene in The Curse of the Black Pearl “you’d better start believing in ghost stories, you’re in one” where he’s revealed to be a skeleton in the moonlight, is so bone chilling and so, well, iconic! I also love Elizabeth and Will’s wedding in the third film, At World’s End. On a ship, in the middle of a battle, Elizabeth shouts to Barbossa: “Barbossa, marry us!” To which he responds: “I’m a little bit busy at the moment!” But he nevertheless marries them, while all three of them are fighting their enemy.

All that and the theme tune (composed by Hans Zimmer, no less) is the best.

On Stranger Tides was Sam Claflin’s first film. You know how I feel about the guy.

In conclusion, Pirates of the Caribbean films are a lot of fun. But if you feel you can’t watch them any more, that’s okay too. And if you’ve never liked them anyway, then it doesn’t matter.

I wonder if Waterhouse would have been a fan?

This week’s Weekly Prompts Weekend Challenge is a festive memory.

Nothing serious happened, to me or to the tree, my mum put it back up and collected the fallen decorations and hung them back onto the branches. One of the decorations, a bauble, got stuck on the net curtain. I don’t know how, it was the glittery stuff it was covered with that must have somehow made it stick to the net curtain. (Is this where I say: “it was the eighties”?)

So that is my festive memory.

Because this is a photography blog, I have pics to share too.

Being a Christmas obsessed kid, and a kid who drew a lot, I started for myself a Christmas book. It was just a sketchbook where I drew Christmas things every year. I still have it to this day. When it looked like I was settling in the UK, I brought it over from my home country. It is not such a relic as it would seem, it has undergone a lot of changes throughout the years (decades!) and only two years ago I redid the cover. But some of my old drawings still remain. The oldest one is dated 1989.

This one is from the following year:

More contemporary, this is 2019 (although it feels like a lifetime ago). Not much effort put into this one, it’s just a fanart of Mariah Carey’s Christmas album.

Actually, speaking of memories, I remember when All I Want For Christmas Is You was released in 1994. Little did we know it would become such a classic.

It’s the anniversary of… something or other.

Because I used to hear it so much I decided to draw it. Like this:

There is no system here. It’s just a collection of random things in summer-like pastel colours. And seashells. And a bit of my art there too. Glad to find a use for a year-old magazine again!

It’s like summer, but indoors. Which is very me.

Here are two pics I put exactly zero effort into:

But those visibly hand-made pieces of art? I made them myself!

And if it’s not a merry time for you, have a peaceful Christmas.

Yeah, I had to go there.

But at least I’m doing this on the 23rd, not on any of the Christmas days. Reality is… well, reality, even at this time of year.

So first of all, I had to make a Brexmas card, because of course.

UK seems like it’s very sick and needs some good care. Just check this out.

It also looks like an England flag, which was not my intention–just a coincidence. Moving on to:

You know how the word snowflake has gained a completely different meaning to what it actually is. Used by people who can’t get over the fact that the world is changing to describe mostly liberals and/or socially conscious (aka woke) people. Snowflake? I give you snowflake. 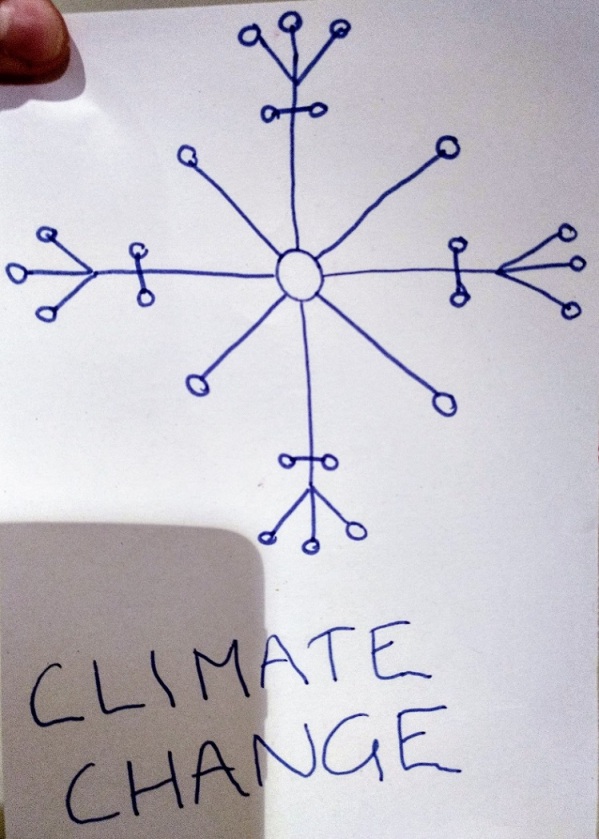 Bonus – a not Christmas throwback

I found this anti-Christmas card I forgot I had among my Christmas drawings and cards (I have this thing I call the Christmas Book, where I’ve been drawing Christmas scenery and stuff since I was very young and in the last few years been saving cards in it, but that’s not what I want to talk about now). I should say I’m not the artist of this brilliant piece–it was done by a coworker. It’s from 2014 and I think it’s hilarious:

The point is, some people just hate Christmas, or can’t handle it. And that’s okay. It’s not an easy time for everyone, whether it’s for mental health issues, having lost a loved one or working in retail, you are all valid. One can also enjoy some aspects of Christmas and not the others. So maybe you like the food but are not thrilled about having to spend time with annoying relatives. I get that.

I have received shit from someone earlier this year when I said Santa Claus wasn’t real. I said it by mistake. (I think I meant to say something else but my communication skills are so poor I’m glad I can express myself on most days, also remember please that I’m not speaking my native language.) But as a result, I ended up hating that figure. Pass me those anti-Santa rockets, by all means.

Let’s just be good to each other, not just at Christmas, but all year round.

Unless you’re a bigot or a horrible person. Then you don’t deserve to be treated nice.

Of course there is more than one. But this is the one I want to show you today: 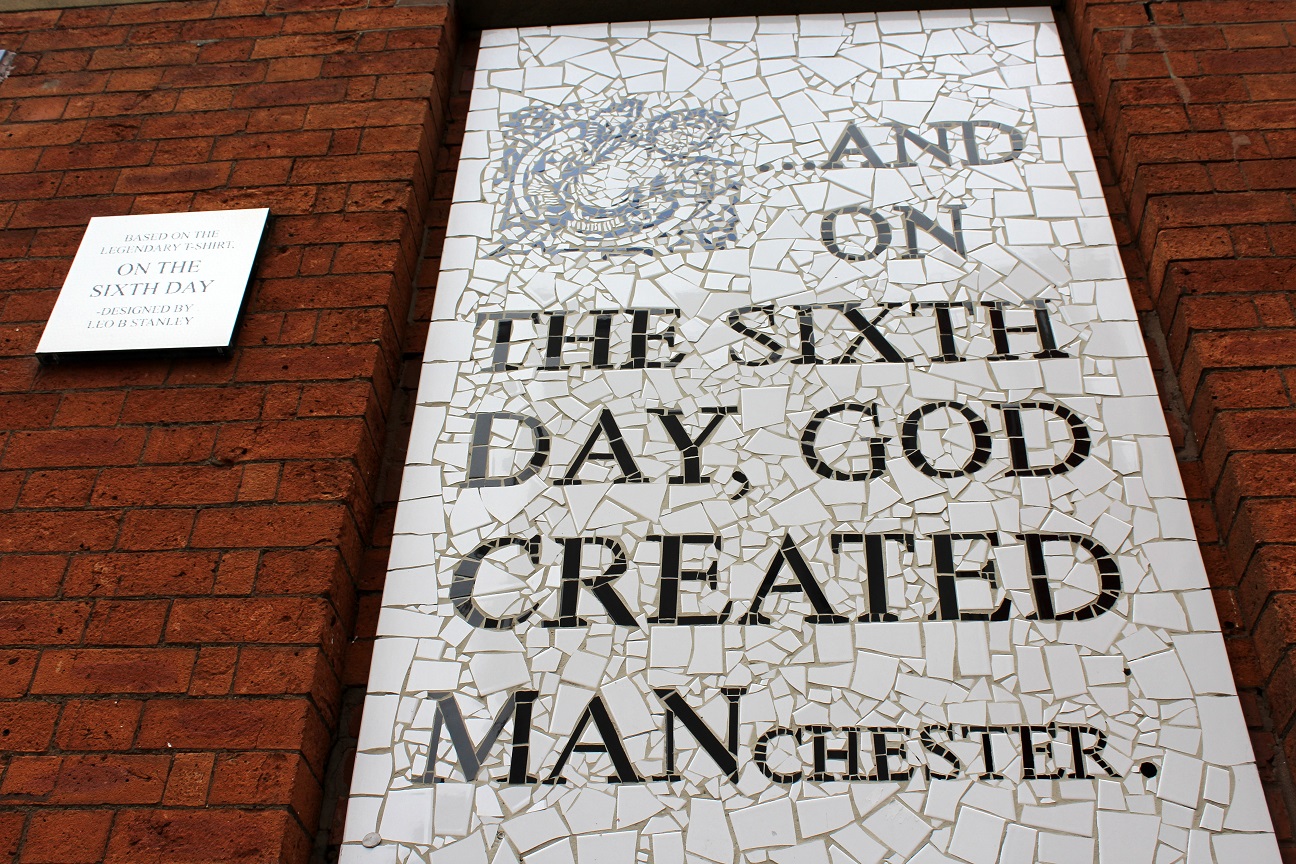 “… and on the sixth day, god created MANchester.”

The plaque next to it says “Based on the legendary t-shirt On The Sixth Day, designed by Leo B Stanley“.

The mural is on the side of the building of Afflecks, formerly known as Affleck’s Palace, an indie department store that houses stalls and small boutiques selling cult merchandise, alternative fashion, retro stuff etc. It’s simply an amazingly cool place. Check it out if you’re ever in town!

What If It Works

Where Were You When